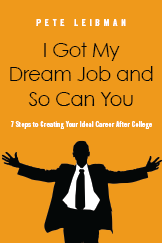 Back in 2010, I joined a networking organization for professional speakers, authors, and experts in a variety of industries and disciplines. I had recently decided to follow a similar career path, and I hoped to learn from these more experienced thought leaders on how to launch my career.

A few months after joining the group, I went to lunch with a group of four professional speakers, all of whom were much more experienced and older than me. Midway through our meal, I shared my dream of landing a book deal with a traditional publisher, rather than self-publishing on my own.

Immediately, the four other people at the table shared how they had been unable to land book contracts. They then used their struggles as evidence that it was not realistic for someone much less experienced (i.e. me) to land a deal either. On the surface, their beliefs probably seemed much more reasonable than my dream. At that point, I had never written anything longer than ten pages, I had never given a paid speech, and I had zero email subscribers or social media followers.

Let me interrupt this story briefly to emphasize one point though.  I was at lunch with a group of motivational speakers.  These people are supposed to inspire others for a living, and they were shooting down my dream! Isn’t that ironic?

Ok, back to the story… So, as these men and women shared their un-motivational opinions with me, I just smiled and nodded. There was nothing to be gained from trying to persuade them to believe that my dream was attainable. They weren’t literary agents, and they didn’t work for publishing companies, so they wouldn’t have any say on whether my dream would come true anyway. During and after lunch, I thanked them for their advice. Then, I continued on my path to try to make my dream a reality.

A few months later, I grabbed coffee with another member of this networking group. She had received several book contracts with traditional publishers. She recognized my passion and potential and the fact that I had a unique story and voice to write a book for students. As a result, she offered to introduce me to her literary agent.

Less than one year later, AMACOM (previously the publishing arm of the American Management Association and now part of HarperCollins, the world’s second largest consumer book publisher) offered me a contract to write my first book- I Got My Dream Job and So Can You.

Doubters Are Doing You A Favor

1. Some people will not believe they could achieve your dream.

The professional speakers who I went to lunch with that day back in 2010 had failed to land their own book deals. They thought their experience was evidence that I would not succeed either, but they were wrong.

Never allow someone else’s pessimism to dictate whether you believe your dreams are possible. Many people (even some motivational speakers!) have allowed life to beat them down. That’s their issue, not yours.

2. Some people will worry that you will be disappointed.

Sometimes, the people closest to us try to temper our enthusiasm for our dreams. They do this to try to “protect” us. They aren’t confident that our dream is achievable, and they don’t want us to get our hopes up only to be disappointed.

Never let someone else reign in your enthusiasm though. Isn’t it better to aim high and come up short than to aim low and wonder what might have happened with more ambition and effort? The only real failure in life is not trying in the first place. Your batting average doesn’t matter, so why not swing often and swing for the fences?

3. Some people will not want you to succeed.

They also have a false belief that there is a finite supply of success available in the world. If you become more successful, they think it will somehow make it less likely for them to be. The truth is that there is an infinite supply of success available to anyone willing to put in the necessary effort. Never let someone else’s limited ambition hold you back from trying to take yourself to a higher level.

Someone else’s beliefs mean nothing until you interpret them. If someone doubts you can succeed, you have two choices:

Think back to the most significant achievements of your life so far. Were there doubters along the way? I bet there were. Doubters can be a blessing though. Our greatest achievements usually occur because people are doubting us, not in spite of people doubting us. Doubters can provide additional motivation and unleash your competitive juices. When someone doubts you can succeed, he has actually done you a favor. Go prove him wrong…