Earlier in my career, I worked for a marketing company called TMA Direct. We helped clients with their direct mail, email marketing, and other direct response marketing efforts.

One day, I noticed a large stack of thick catalogs on a table in one of our executives’ offices. The stack was about three feet high, and it was the only pile in this man’s entire office. It definitely stood out, and I asked him about it.

He told me that he was on the mailing list for a well-known retail company. Over the last few months, this organization had sent him more than a dozen catalogs. Each was full-color, over 100 pages long, and several inches thick. Each weighed 2-3 pounds.

He was going to keep all of their catalogs until the pile was at least five feet high. Then, he planned to mail them back to the retailer in one huge package, along with a letter asking for a meeting.

This retailer was wasting a ton of money on these catalogs. My colleague knew he could help them increase their marketing ROI dramatically. Rather than cold call them, he figured sending them a 50-pound package of their recent catalogs would be much more likely to get their attention.

I ended up leaving TMA before he was able to follow-through, so I unfortunately don’t know the outcome of his plan. However, this example stuck with me. It ultimately served as the inspiration for a strategy that I now refer to as using habit math. In this article, you’ll learn how to use this strategy to break bad habits and make good ones last.

One of My Experiences with Habit Math

For the first 12 years of my life after college, I rarely recycled. While this is embarrassing to me now, everyone has some bad habits. Throwing out recyclable material was one of mine. (Not recycling is apparently a bad habit for many people. According to the EPA, the U.S. recycling rate is only 35%.)

When I moved into a new apartment a few years ago, the trash room in my new building had a large sign and a separate receptacle that encouraged us to recycle. I knew it was the right thing to do, so I decided to give it a try.

I placed a big brown paper bag from Trader Joe’s in a corner of my kitchen. When it came time to throw out something recyclable, I started placing the item in that bag, instead of the garbage. In less than three days, the entire paper bag was full of cans, cardboard containers, plastic, and glass bottles. 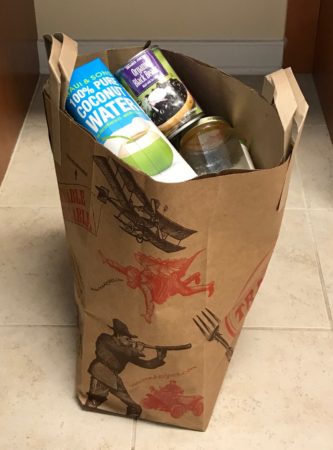 This is a photo of a couple of days of my recycling efforts.

It was eye-opening. If I could fill up a bag in a couple of days, how much recyclable material had I irresponsibly thrown away in the past? Immediately, I was inspired to make recycling a habit. Years later, this habit is still going strong.

Habits Add Up Quickly- Are You Doing the Math?

My prior failure to recycle was obviously not due to a desire to harm the environment. It was just a mindless habit.

In the moment, it might seem like you are only eating one cookie, or only watching one show, or only spending a few minutes on Facebook. However, it’s not just one behavior. It’s one behavior that you repeat over and over and over.

Isolated behaviors might not seem like a big deal. However, they add up quickly. In Work Stronger and in my corporate programs, I use a simple example to illustrate this point. If you drink one sixteen-ounce sweetened iced tea today, that’s only 150 calories and thirty-seven grams of sugar. That by itself is not a big deal.

However, that becomes a big deal when you do it every day, which would result in you consuming over 54,000 calories and over fifteen pounds of sugar over the next year. That’s the same amount of sugar found in over 15,000 Skittles.  And, that’s one “small” bad habit.

How to Do Some Habit Math

It’s even better if you can add a visual component, like my colleague did with his catalog stack and like I did with several days of recycling. However, even just writing out your habit math can be highly motivating.

These days, whenever I start working on a new habit, I do some habit math first. For example, when I started StrongerHabits.com, I calculated the long-term value of writing a new article each week.

While writing my first article did not seem that impactful, it was exciting to think about the impact of writing an article each week for a year. I realized this weekly habit would lead to more than 50 articles and over 50,000 words (if my average article was 1,000 words).

This was highly motivating to me, and it became a self-fulfilling prophecy. In my first year of writing at StrongerHabits.com, I wrote over 50 articles and over 51,000 words. Without the vision created by doing some habit math up-front, it’s unlikely that my results would have been as significant.

Your habits add up quickly- whether you take the time to think about them or not. Are you doing the math?

If you want to ignite your motivation to break or make a habit, do some habit math first. Identify one behavior that you would like to stop doing or start doing. Then, calculate the long-term consequences or benefits of repeating this behavior for a month, a year, or longer. By identifying the long-term impact, a change will seem much more important and be much more likely to last.