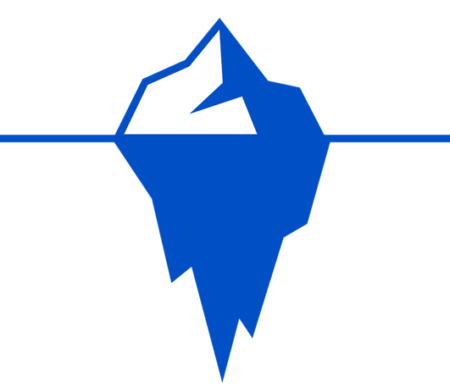 Have you ever wondered how some people resist temptations more than others? In this article, you’ll learn one of their secrets. They use something that I refer to as The Iceberg Rule.

One of the leaders who I interviewed for my book Work Stronger is Dr. Larry Senn. He is the octogenarian chairman at Senn Delaney, a global culture-shaping firm that has worked with over one hundred Fortune 500 CEOs and their teams.

Many people over the age of eighty are battling major medical issues like dementia or heart disease. However, Larry continues to flourish, and he does not plan on slowing down any time soon. He still works full-time, and he recently authored The Mood Elevator: Take Charge of Your Feelings, Become a Better You. Outside of work, he competes in triathlons, and he also participates in action sports like jet skiing and zip-lining with his family. (Last time I checked, Larry also has the highest score ever recorded on The Stronger Habits Assessment that you can take for free here.)

Compare that thought with the typical thoughts that most people have when they see a cookie. Most people think about how great the cookie would taste.

Backed Up By Science

For example, in a study led by Dr. Hedy Kober, heavy cigarette smokers were shown photographs of cigarettes to induce cravings. One group of participants was instructed to think about the immediate, short-term effect (i.e. “it will feel good”), while the other group was instructed to think about the long-term consequences (i.e. “I may get lung cancer”). Researchers found that focusing on the latter led to a significant reduction in cigarette cravings.

Dr. Walter Mischel discusses this study in The Marshmallow Test: Understanding self-control and how to master it. As he writes, “we found that people can use simple cognitive strategies to regulate their cravings by shifting their time perspective from ‘now’ to ‘later.’” He also refers to this as “cooling the now and heating the later.”

In other words, if you experience a craving that you want to resist, you can reduce your chances of giving in by focusing on the long-term costs (which are hidden “below the surface”). Don’t focus on the short-term benefits (which are visible “above the surface”).

Will this strategy immediately help you stop doing any unhealthy behavior for good? Of course not. However, this is one strategy that can be used to break bad habits over time.

Many short-term rewards provide gratification that is immediate, but brief and largely unsatisfying. Many also come with what I refer to as a Gratification Cost. Every time that you eat a cookie, smoke a cigarette, waste time on social media, or engage in other low-value or harmful activities, you get a short-term reward. Otherwise, you would not do the behavior. However, you also move a little further away from feeling and performing your best.

This does not mean that every second of your life needs to be productive and healthy. (In fact, as discussed here, breaking a good habit occasionally might actually be good for you.) This simply means that life is a series of trade-offs. Giving in too often to short-term temptation will lead to problems down the road.

If you give in to short-term gratification more often than you would like, you might think your problem is a lack of willpower. However, your real problem might be the way that you are thinking about the present and the future.

People who are thriving in any area of life are not “willing” themselves to greatness. They are forming stronger habits by thinking differently and by engineering their lives very carefully. They see what is “below the surface” for each choice that they make in the short-term.

As another example, consider the meticulous lifestyle of NFL quarterback Tom Brady.  Soon after winning his fifth Super Bowl in 2017, Brady was interviewed by Peter King, a Senior Writer for Sports Illustrated.

King asked Brady about some of his habits. For example, Brady is known for eating “avocado ice cream,” a healthier alternative to the sugary kind that most of us eat. He also goes to bed before 9:00 p.m. each night. King asked Brady if he misses staying out late with friends these days- like he used to do earlier in his life.

“Not really,” Brady said, “because I know what I’m getting on the other end. I know I can enjoy other experiences with my friends that don’t have to happen at 1:00 a.m. I can have my friends at a Super Bowl game as a 39-year-old. That’s a pretty amazing feeling. So it doesn’t ever feel like a sacrifice to me … That’s making lifestyle choices that support dreams and goals that I have.”

If you want to form stronger habits in any area of your life, you don’t need more willpower. You need to be more mindful of what’s below the surface for each of your choices. Remember The Iceberg Rule.

While your perspective on the present vs. the future is not the only factor that determines your behavior, it’s a key ingredient. The more you focus on the long-term benefits or consequences of your behavior, the more often you will resist temptation and act in your best long-term interests.