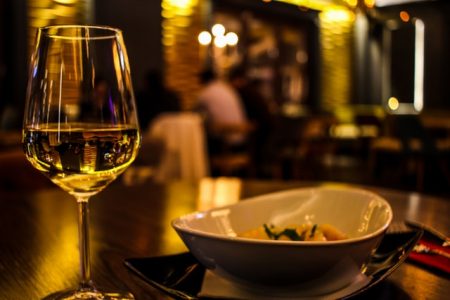 I recently joined a group of friends for dinner at Matchbox, a “vintage pizza bistro.” Before our waiter took our orders, one of my friends announced to the group that he would be ordering a salad instead of a pizza. He was headed to the Caribbean the following week, and he was cutting back on bread and carbs in order to try to “tighten up” before his beach vacation.

When the waiter took our orders, my friend stayed true to his word. He ordered a salad, and he even asked for the dressing on the side. However, when he ordered his salad, he also asked for the first of what eventually became three Rum and Coke’s.

My friend might have cut back on his carbs with the food that he ate that night, but his drinks provided as much sugar and as many calories as if he had eaten over 100 Skittles with his salad. Many people forget or fail to recognize that liquid calories count, too. Drinking calories or chemicals might be the worst (and most common) “eating” habit.

It is incredibly obvious advice to recommend that you drink more water, but few people actually follow this habit, so it’s worth emphasizing. There are two key benefits of making water your primary beverage:

1. You need a lot of water to feel and perform your best.

Water makes up about 60 percent of your body weight. You need a lot of it to support a number of essential functions. Dehydration can lead to cramping, nausea, headaches, fatigue, irritability, inflammation, weaker athletic performance, and reduced mental capacity.

If you aren’t drinking water, what are you drinking? For many people, the answer is alcohol, soda, sweetened iced teas, fancy coffee drinks, and artificial sports/energy drinks that contain as much sugar and as many additives as soda.

Alcohol can be the most dangerous beverage of all. The calories add up quickly (each alcoholic beverage typically contains at least 100-200 calories), and alcohol can also trigger poor eating decisions. “I could really go for some broccoli right now,” said no buzzed or intoxicated person ever.

How much water should you drink each day?

If you are looking for some guidelines on how much to drink each day, I like the recommendation that NFL Quarterback Tom Brady provides in his book The TB12 Method; How to Achieve a Lifetime of Sustained Peak Performance. Brady recommends that “everyone, even non-athletes, consume at least one-half of their body weight in ounces of water every day.” [1]

For example, Brady weighs 225 pounds, and he says that he drinks 200-300 ounces of water on some days when he is especially active. “Sometimes, I think I’m the most hydrated person in the world,” he says. [2]

How can you drink more water?

You could drink more water by including it with your meals and snacks, or by drinking some water whenever you take breaks at work. As another example, you could use your commute time as a way to drink more water. A woman at one of my recent workshops said that she drinks about 30 ounces of water each day on her commute to work and again on her commute home from work.

If you are looking for an easy, natural, delicious way to spice up your water, you could create your own infused water. Test out different combinations using herbs like mint, spices like cinnamon, vegetables like cucumbers, and fruits like lemons, limes, or berries.

Drink water, not calories or chemicals. Proper hydration makes your body and brain stronger. Depending on your current drinking habits, you could lose ten pounds or more simply by replacing some of your typical beverages with water. Another one of my friends recently lost over twenty-five pounds in six months just by cutting back on how much soda that he was drinking.

Would you like to look better, feel better, and perform better? Beware of your liquid calories. You are what you eat and drink.